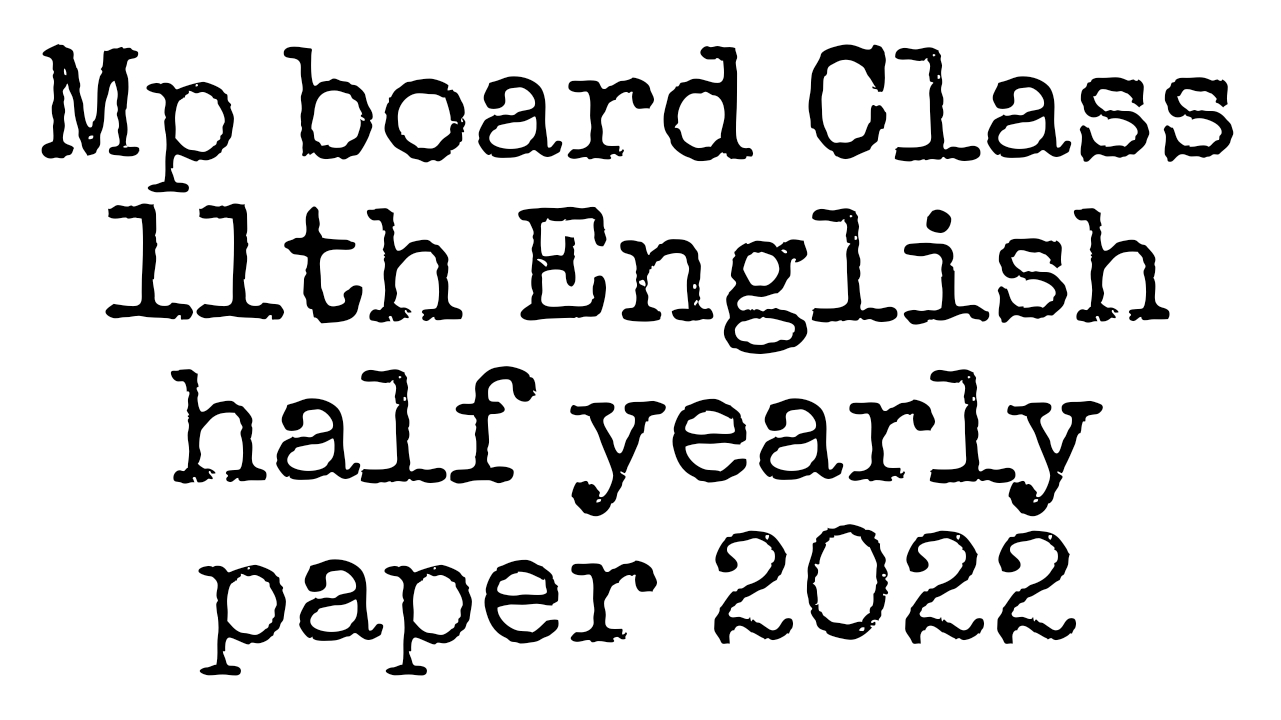 HALF YEARLY EXAM 2022 ,23
Class-11th
Time: 3/00 Hours
Subject-English MM/80
Instructions: – All questions are compulsory.
Marks are indicated In front Of each question.

SECTION-A (READING)
Q Read the following passage and answer the questions on the basis of comprehension of the passage.
ra did not just win a gold medal, flinging the javelin a staggering 87.58m to top the charts in Tokyo, but vaulted himself into history books. It would go down, to date, as the most historic of medals in India’s Olympic history. Perhaps, the most historic in the nation’s sporting history. The gold, a historic first for the country in track and field, the second for an individual ever and the first since Abhinav Bindra’s in 2008, would also ensure India’s richest-ever tally (seven). Much before he won the countrys first-ever track and field medal, they used to call Neeraj, the village Sorpanch (headman) in Khandra, near Panipat. What started as a joke turned out prophetic.
Growing up at Khandra village, near Panipat, Neeraj was an overweight and restless kid most of the time. Since they wanted to keep him occupied, his father, a farmer, took him to the Shivaji stadium. Neeraj had tried other sports too. He was not too fond of running, but when he saw a few heavy men throwing the javelin, he wanted to try it too. When he realised that he was good at it, he started loving it more. Many, including Calvert and Volker Herrmann, who was the AH’s High Performance Director before quitting in November last year, felt that Neeraj would start winning medals from the 2024 Paris Olympics. He has prove4 them right by clinching a medal and proved them wrong by doing it four years early. He has been a consistent performer since bursting into spotlight with a historic gold in the junior world championships in 2016 with an Under-20 world record of 86.48m which still stands.
His other achievements include gold medals in the 2018 Commonwealth Games and the Asian Games, besides the top finish in the 2017 Asian Championships. He is also a 2018 Arjuna Awardee. There is still a wall-hanging in the drawing room of Chopra’s ancestral home which features an oft-repeated motivational quote – “A single idea can light up your life.” The Chopra family’s single idea to let him pursue javelin throw on Saturday lit up the country in its golden glow.

(a)Neeraj Chopra (b) Abhinav Bindra (c) Calvert (d) P.V. Sindhu
(iii). Neeraj Chopra was called his village.
(a) golden boy (b) headman (c) junior (d) lord
(iv). Neeraj won his gold medal in ——-Olympics.
(a) Paris (b) Tokyo (c) London (d) Beijing
Which Of these is a true statement for the above passage?
(aNeeraj was taken to Shivaji Stadium by hismother.
(b) His family did not want him to throw javelin.
(c) Volker Herrmann felt Neeraj would never win a medal in Olympics.
(d) Neeraj has an under 20-world record of 86.48 m.
(vi). Neeraj has been given-
(a) Dronacharya award (b) Ekalavya award (c) Arjun award (d) padmashri
(vii). Neeraj has also won gold medals in-
(a) Commonwealth Games (b) Asian Games (c) junior World Championship (d) All of these
(viii). Which of the following is similar in meaning to ‘consistent’?
(a) varying {b) same (c) different (d) changing
(ix). The authors purpose in writing the above passage is

(a) to describe India’s medal tally in Olympics (b) to aware about the importance of sports (c) to glorify javelin throw (d) to narrate journey of a village boy to Olympics
(x), Which of the following is the correct antonym of ‘include’?
(a) preclude (b) exclude (c) seclude (d) occlude

Q.2 Read the following passage and make notes on it. Give a suitable title. (4)
Conversation is indeed the most easily teachable of all arts. All you need to do in order to bécome a good conversationalist is to find a subject that interests you and your listeners. There are, foöexample, numberless hobbies t; talk about. But the important

thing. is that you must talk about other felloWs hobby rather than your Qwn, Therein lies the secret of your popplarity, Talk to your friends about the things that interest them, and you will get a. reputation for good fellowship, charming wit, and a brilliant mind. There is nothing_that pleases people so much as your interest in their interest.
It is just as important to know what subjects to avoid and what subjects to select for good conversation. ‘f you don’t want’ to be set down as a wet blanket or a bore, be careful to avoid certain unpleasant subjects. Avoid talking about yourself, unless you are asked to do so. People are interested in their own problems not in yours. Sickness or death bores everybody. The only one who willingly listens to such talk is the doctor, but he gets paid for it.
To be a good cohversationalist you must know not only what to say, but how also to say it. Be mentally quick and witty. But don’t hurt others with your wit. Finally try to avoid mannerism in your conversation. Don’t bite your lips or click your tongue, or roll your eyes or use your hands excessively as you speak.
SECTION -B (WRITING)
Q.3 Your father has been transferred to another city. You want to sell certain household goods. Design a suitable advertisement to be published in a local neWspaper.
or
Design a poster to be issued by the Bhopal Police cautioning people not to touch any unclaimed objects.
Q.4 You are Amit Sharma, residing at F-20, Jyoti Nagar, UjJain. Write a letter to the editor of a newspaper complaining against the nuisance caused by loudspeakers in your locality.(4)

Or
You are Sakshi, residing at 10, Shivaji Nagar, Jabalpur. Write a letter to your mend inviting her to spend summer vacation in your village,
Q.S Write an article on any one of the following topics in about 200 words. (4)

Q.15 ‘The Address’ is a story of human predicament that followsComment.

How do you distinguish between information gatherins and insisht infonnation

Firstly you go on the Google

After that you can search on Google airfindia