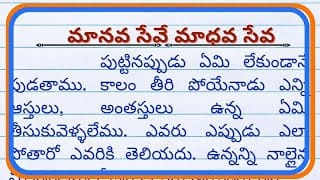 THE SPIRITUAL SCIENTIST
A Cyber Magazine for Those Who Think
Vol 3 Issue 12
Is Manava Seva Not Madhava Seva?
(Is Service to Man Not Service to God?)
Picture the sights of a child with match-stick like arms and a bloated stomach indicative of chronic malnutrition, a
grief-stricken family standing besides the rubble that was their home prior to a devastating earthquake, a crippled
beggar struggling to drag himself along the floor on a metropolitan railway station, piteously calling for alms and a
bright-eyed young woman dejectedly contemplating the prospect of inevitable blindness due to not having money to do
a cataract operation. Graphic sights of human suffering like these touch the hearts of all sensitive human beings and
impel them to compassionate relief work according to their capacity. On seeing such intense suffering all around-
suffering which can apparently be counteracted by material means, some people tend to think of religion and worship as
an unaffordable luxury. And the idea of spending lavishly on religious worship while thousands starve to death appears
to be an expression of heartless apathy of the religious for the suffering of their fellow humans.

Social service being a practical expression of natural human concern and compassion for the distressed, undoubtedly
has an important place in every civilized society. However slogans like “Manava seva is Madhava seva” (Service to man is
service to God) often have a covert undertone, “Religion and spirituality are unnecessary and indeed undesirable. These
are anachronisms from an age of sentiment, blind faith and utopian longings, which intelligent moderns should replace
with practical measures to uplift others.” In bringing about a better world, can service to man replace entirely service
to God? Or, even if God is not completely banished from modern human society, can service to God be kept on the
backburner till service to man brings about adequate alleviation of human suffering? We will address these questions in
this article by considering a widespread social problem – starvation and generalizing the principles explored therein for
other problems.
THE CAUSES OF STARVATION
On seeing a starving person, an instinctive reaction is to want to give some food. This will certainly offer some
immediate relief, but a thoughtful person will also ponder: “A few hours later he will be hungry again. What has brought
this person to the stage of starvation? And how can that cause be permanently tackled?” Some of the sociological
causes of starvation relevant to our discussion are analyzed below: